The Future of Making Things

Reinforced roof structure atop the Kalgoorlie Consolidated Gold Mines in the Australian Outback. Courtesy of Advantic.

Advanced structural materials extend the toolkit for builders and engineers

Rust, corrosion and exposure to harsh weather are common plagues for ageing structures containing steel and concrete. But times have changed and materials have evolved. Dayton, Ohio-based Advantic is designing and fabricating innovative polymer composites that provide high-performance alternatives to traditional concrete and steel – disrupting the construction industry with lighter, more durable materials that help structures stand up to extreme environmental conditions.

Advantic is a startup focused on delivering advanced materials for the construction industry. The company creates customised composite materials that provide a new range of options to engineers and builders dealing with challenging environmental conditions. “We're kind of the ‘easy button,' if such a thing exists, in the construction industry,” says Advantic President Brad Doudican. “If composites are the right solution, we're going to find the right material solution that addresses the specific problem.”

Composites take two dissimilar materials and combine them to create a lighter or longer-lasting alternative. “What we're doing, mainly with fibreglass and some different types of resin chemistries, is taking materials that have been developed in the aerospace industry and using that technology in the civil market and construction,” says Advantic Vice President of Operations, Jeff Nielsen. 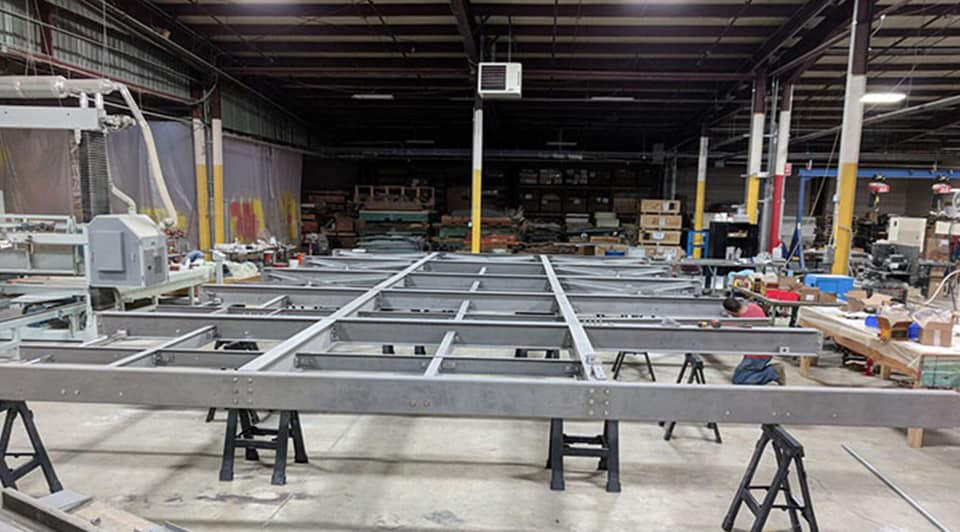 Each Advantic project is unique, involving extensive client collaboration – from working out preliminary budget, engineering and materials methodologies to advising on construction and installation. Advantic's fabrication is done in house, manufacturing bolt-up components that don't require welding. “What we typically end up with, what we deliver to the customer, is a kit – an erector set,” Doudican says. “It's a set of components down to nuts and bolts that arrives on a skid and it goes out on a truck to the jobsite.”

Proving the value of composite materials for construction

Advantic completed its first big project in 2013, when the company helped the New York City subway system meet new fire-code requirements for ventilation by casting polymer composites. The new material is 75 per cent lighter than concrete, maintains the same compressive strength, is noncorrosive and is much more permeable to radio frequencies – critical to the project's maintenance requirements.

Advantic's next project proved an even bigger challenge: reinforce a stadium-size, corroding steel roof structure over the Kalgoorlie Consolidated Gold Mines in the harsh Australian Outback. The challenge? The team had only 10 days to do it. 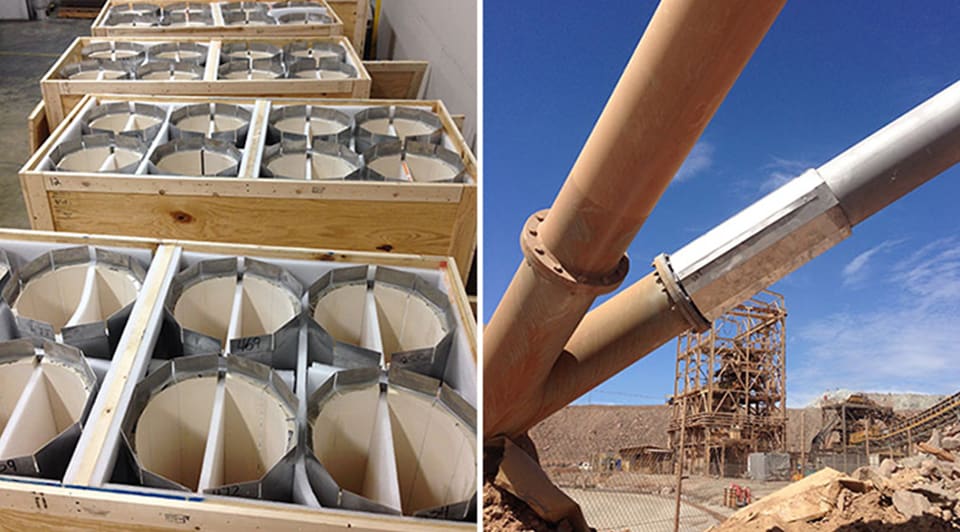 Advantic's solution for the Kalgoorlie mines, called Structural Syntactic Jackets, were light enough to be shipped airfreight to Australia from Ohio. At right, a closeup of the Jackets in context. Courtesy of Advantic.

Newmont Mining Corporation had spent years searching for a Kalgoorlie solution and was now facing a shutdown window. The slowness and cost of traditional reinforcement options, requiring extensive installation crews, was a major barrier. When approached, Advantic was quick to jump at the opportunity.

“We did some early engineering with them and showed them where composite materials, being lightweight and incredibly strong, and the design abilities we had in-house could be used against the specific structural problems they were facing,” Doudican says. “What it resulted in was a series of products that remediated the primary structural elements. We fabricated those here in the States and they were so light, in fact, that it was economical to airfreight them over to Australia.”

That solution, 700 pieces in all, was easily installed by teams of two and a boom lift – in nine and a half days – beating the deadline and saving Newmont roughly $6 million AUD. Real-world validation for that work came in mere months through an email with an ominous subject line: “Massive storm in Kalgoorlie.” A strong storm cell had made its way across the Outback, damaging a number of structures in the community. However, attached to the email was a picture of that storm, with Advantic's structure standing strong beside it. “Hey, congratulations, full-scale load test passed,” read the rest of the email.

In another test of Advantic's materials, Cleveland Metroparks Zoo approached the company about modifying its gorilla enclosure. To help the zoo introduce a new gorilla into the environment and give all the animals more space, Advantic designed the Gorilla Chute, an elevated tunnel that offers the gorillas a 360-degree view of their habitat. In this situation, composite beams were preferable to steel to lessen the disruption to the gorillas and neighbouring animals. 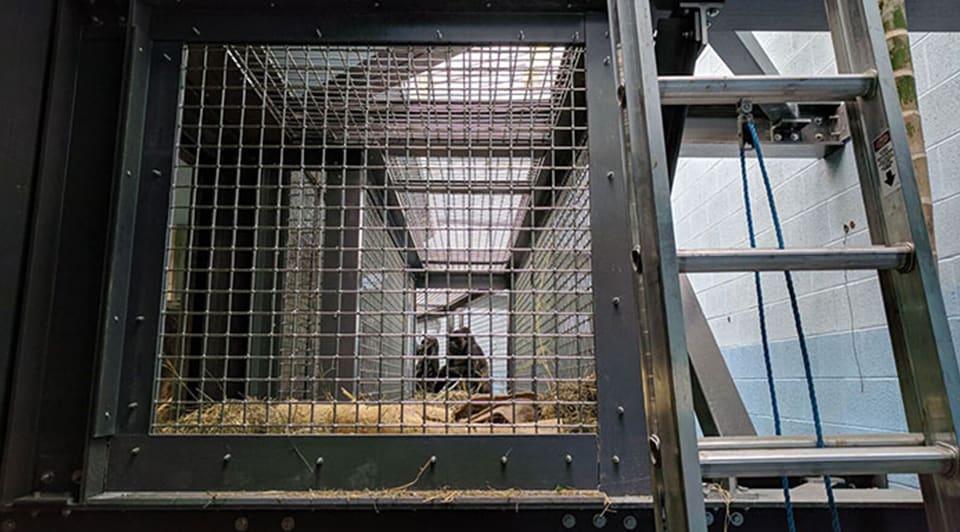 “With steel fabrication, you have toxic gases with welding, loud and intrusive installation and generally a more caustic environment,” says Advantic CAD Engineering Technician Luke Sideras. “We were able to cut and drill all our beams in our warehouse before they even got to the zoo. This drastically reduces the downtime that the gorillas are required to be moved, which can cause stress to the animals. It was a really fun project to work on and worked out extremely well for everyone.”

It's successes like these that are helping Advantic make inroads in the construction industry, which has been slow to adopt technology because it's so entrenched in traditional means and methods of completing projects. But as Doudican notes, new materials are a risk for owners, contractors and engineers, so it's up to his team to build that risk tolerance through trust. Using Autodesk Fusion 360, Advantic has colleagues working through drawings in the field on the fly and in the shop back in Ohio, with all changes reflected in real time. “It helps us to optimise our project-delivery process,” Doudican says. “And at the end of the day, it builds trust in our customers, which is the biggest thing we need.” 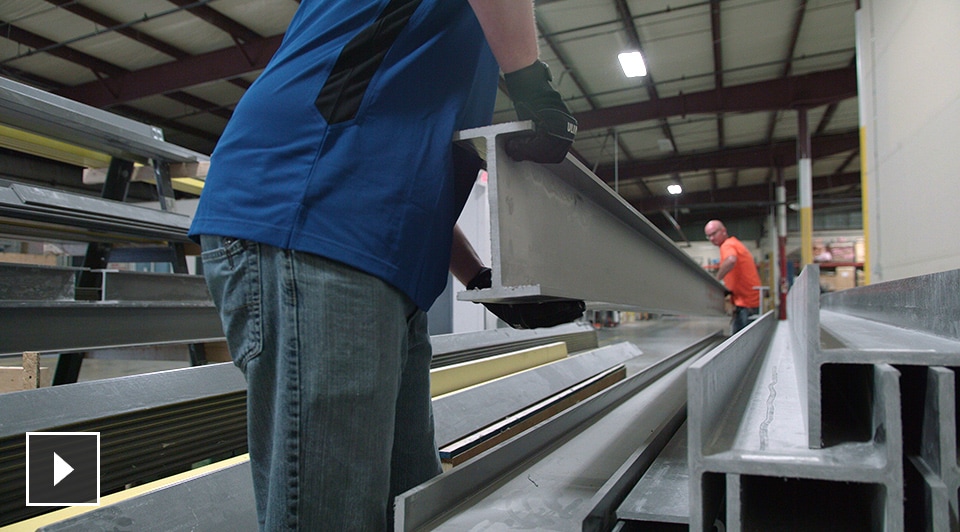 Advantic is also building trust through the strength and performance of its composite materials, which can far outlast conventional materials. “We can produce the same strength profiles as concrete materials, but we can do it at 50, 60, 75 per cent lighter,” Doudican says. “An incredibly lightweight concrete is a real opportunity in construction because a lot of the construction cost is not associated with the material itself, but moving that material into location and safely putting it up.”

Cast polymers are the lightest of Advantic's concrete alternatives, which can often be manoeuvred without the help of expensive and dangerous overhead equipment. Advantic also develops proprietary polymer concrete formulations that are heavier than the cast polymers to line utility vaults and trenches because they're not susceptible to alkaline corrosion and have no permeability issues. “With the concrete and steel alternatives, these composite materials really extend the toolkit that a builder or engineer has to work with,” Nielsen says.

Doudican agrees, noting that builders can still be apprehensive when encountering Advantic's materials for the first time. “But the first time a steel erector tells you, ‘Wow, that stuff was amazing – we were carrying it around on our shoulders!' or ‘We put this up three, five, 10 times faster than it could have been with conventional materials,' that kind of feedback tells you you're heading down the right road,” he says.

That road is paved with enthusiasm for new materials, a remarkable feat in such a traditional industry. “The thing that's been really fun with changing construction by introducing composites is seeing how quickly people get it – people who are used to their traditional toolkit of steel, concrete masonry and wood,” Nielsen says. “It's exciting that others recognise the value so quickly.”

A version of this article ran previously on Redshift. (US site)